The Importance of Depth of Field for Weld Cameras

Weld Cameras allow operators to remotely monitor weld processes by capturing a video of the weld arc and its background and displaying it on a digital screen. However, the quality of the video generated greatly affects how well an operator is able to determine if all the parameters of the welding process are adjusted properly.

When the key features of a weld are in focus, light rays originating from those features converge at a point on the camera's sensor. If the light rays hit the sensor at slightly different locations (arriving at a “disc” instead of a point), then the object will be rendered as out of focus — increasingly so depending on how far apart the light rays are.

Depth of field is a key parameter that affects how well an operator can see features of an image. It is one of the most important performance metrics for a Weld Camera.

Depth of field is defined as the distance between the nearest and farthest features in a welding scene that appear acceptably sharp in an image. Precise focus is possible at only one distance from the camera, but normally the decrease in sharpness is gradual in front of and behind the point of precise focus, so that within a range, known as the depth of field, the image appears to the operator to be in focus.

The depth of field does not abruptly change from sharp to unsharp, but instead occurs as a gradual transition. In fact, everything immediately in front of or in back of the focusing distance begins to lose sharpness — even if this is not perceived by our eyes or by the resolution of the camera. 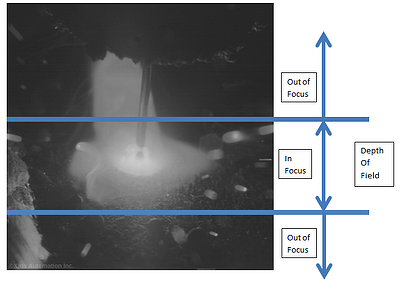 A Weld Camera can be set up to be in focus at a fixed point away from the camera, known as the plane of focus. The plane of focus determines more than just what is sharp and what is not in a welding image; it also directs the eye of the operator to the subject. The shallower the depth of field and the larger the distance between the foreground (weld arc) and its background, the more difficult it becomes for the operator to properly identify what is going on in the background around the weld.

When setting up a Weld Camera, it's important to ensure that the subject of the weld environment (e.g. weld arc, seam, or weld pool) is in focus. The higher the optical quality of a camera, the more precise the focus mechanism has to be in order to achieve critical focus of the image.

The ability to focus a Weld Camera has by far the greatest impact on the resolution and perceived sharpness of an image to the operator. When a motorized focus adjustment is added to a Weld Camera, the plane of focus can be moved back and forth to center it on the most important features in the image.

Depth of Field and Aperture Size

Generally, the smaller the aperture used, the greater the depth of field. However, when the aperture becomes too small, such as in a pinhole camera, other problems develop: The edges of the images become out of focus due to diffraction, an optical effect that occurs when light disperses as it passes through a very small aperture.

In a Weld Camera, this could render background details out of focus, reducing the perceived depth of field. In addition, because a pinhole aperture allows very little light, when imaging a scene when no weld is present, a large amount of extra light is required to generate a reasonable image.

Depth of field is a key parameter to improve the perceived quality of an image from a Weld Camera. Greater depth of field allows operators to see more details of the weld process in focus, helping to bring their attention to the relevant subject and allowing them to better monitor the quality of the resulting welding process.