The Xiris XVC-1000 Weld Camera is a High Dynamic Range camera ideally suitable for monitoring all types of welding environments, including TIG, MIG, Laser, Plasma, Electron Beam and Friction Stir. By being able to see a high dynamic range of light intensity, the camera is able to capture images of both the brightest areas of a weld arc, as well as the darker, surrounding environment, all within the same image. The camera is able to do this while running at a maximum frame rate of 55 frames per second when it is in full frame mode (1280 x 1024 pixels). 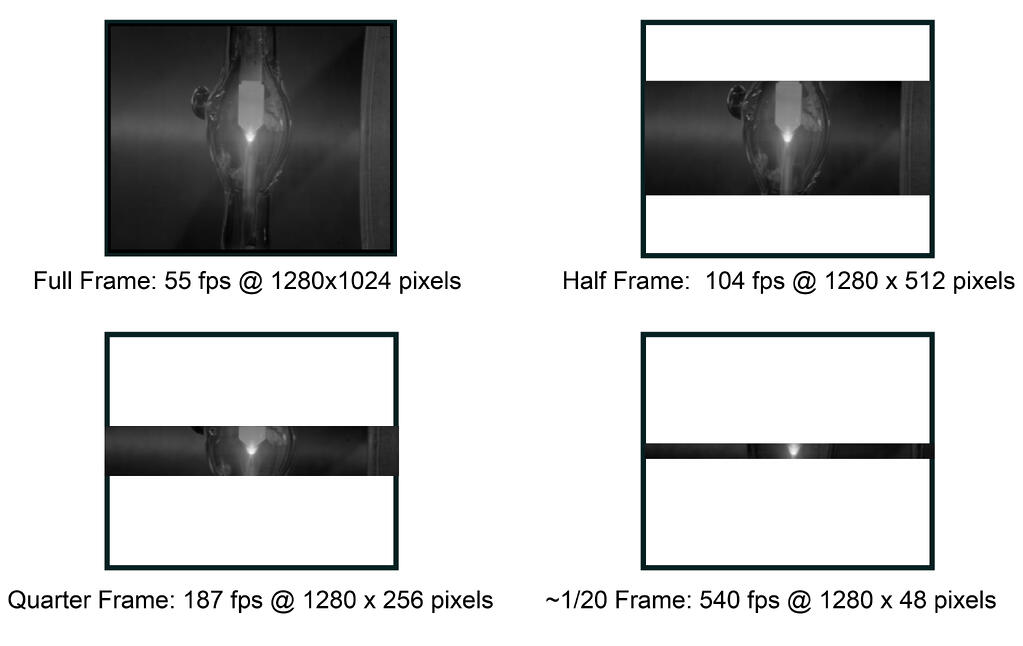 Operating at higher speeds provides a whole new range of opportunities to monitor specific features in a weld. For example, in a laser spot welding application where the on-time of the weld is well under 1 second, it is helpful to have as many images of the weld as possible. Therefore, by reducing the area of interest to the immediate area of the weld arc, operators can acquire enough images to get a reliable record of the laser heat up, weld time and cool down phases of the laser welding cycle.

Another possibility is the acquisition of multiple successive images taken very quickly. A traditional weld process such as short-circuit MIG welding will see droplets of molten filler wire leave the torch and make its way to the material being welded. By focusing on the area of the weld arc itself, a small area of interest could be established that could be acquired at high speed, freezing droplets of molten wire in flight.

While the frame rate of the camera cannot be increased by reducing the width of the image, this can have some additional benefits, where the camera could be turned sideways so that a vertical segment of image can be acquired, rather than a horizontal segment.

A High Dynamic Range Camera such as the Xiris XVC-1000 can acquire good quality images of a weld at full resolutions of about 55 frames per second. However, sometimes high speed image acquisition of the weld area is necessary to monitor certain high speed characteristics at much higher speeds. This can be achieved by reducing the area of interest to be acquired, to take the image acquisition rates up to as high as 900 frames per second.