Success at Fabtech Atlanta for Xiris!

Fabtech is North America’s largest metal forming and fabricating event that occurs every year. Fabtech began in 1981 and had grown steadily since, this year alone the show featured over 27,000 attendees and 1,400 exhibitors. Xiris was very pleased to be one of these exhibitors, and was very excited to debut our new product, the Xiris XVC-1000 Weld Camera, at Fabtech in Atlanta, Georgia this past November 11-13th.

The Xiris booth featured two examples of the new camera system: one camera was installed on a laser beam delivery system that demonstrated how well the camera integrates into laser, plasma or electron beam welding machines; and the other camera was integrated to a high intensity LED light source that could demonstrate the ability to see a super bright object while able to image darker areas in its background, similar to an actual welding environment.

The Xiris booth was in Hall C, which focused on companies exhibiting equipment for the Welding and Tube & Pipe industries. There were numerous booths specializing in welding equipment, and Xiris had weld camera systems for both Open Arc and Submerged Arc Welding demonstrated in a variety of other booths including: Lincoln Electric, Gullco, Irco, LaserMech, LJ Welding/Praxair, Red-D-Arc/AirGas, and ESAB. This display of the weld cameras inspired plenty of interest in the product line that kept the Xiris sales team very busy during the show!

Xiris is proud to partner with so many prominent companies, and respond to so much interest during the show. Many welding machine builders and laser manufacturers saw great value in integrating the Xiris Weld Camera into their processes and machinery. With small format size, high dynamic range capability and remote imaging, the XVC-1000 is a powerful addition to any welding process. 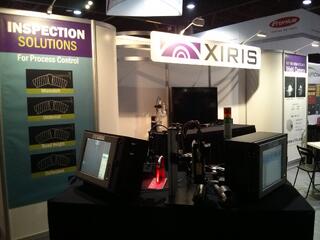 The Xiris Booth at Fabtech

After a successful show, Xiris returned with high hopes and prospects for the XVC-1000.
For more pictures of the show, please visit our social media pages!
See you at Fabtech Chicago 2015!