Imaging the Changing Intensity of the Laser Spot

A major challenge that manufacturers face when integrating a weld camera to a laser weld process is the changing amount of reflected light that comes back to the camera.  Huge swings in brightness of reflected light can cause challenges when trying to produce a good image, requiring a high dynamic range camera with the ability to change quickly to rapid brightness variations.

To explain this phenomenon, it is useful to look at how the incident laser light hits the substrate during a welding or cutting process and how the reflected light bounces back to the camera.

Stage #1: Once the Laser is Powered ON

When the laser is first powered on, the substrate is typically flat and perpendicular to the rays of incident light of the laser as the surface has not been melted by the laser radiation at this point.  As a result, a high amount of light from the laser gets reflected right back to the laser beam delivery optics and eventually to the camera, creating a momentary flash of intense brightness.  This bright reflection could saturate and even damage some cameras. 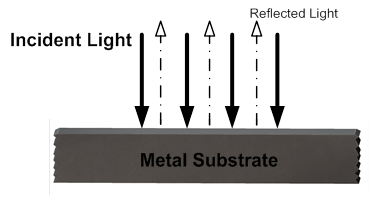 After a brief period, the laser starts to melt the surface of the substrate, creating a small concave molten layer.  The reflected light going back into the laser beam delivery system reduces as there is a bit of focusing of the reflected light rays. 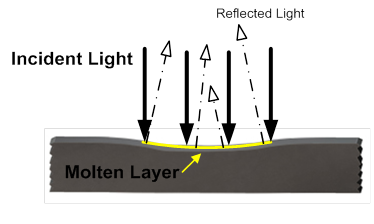 After a little more time, a deeper cavity is formed as the laser vaporizes some of the substrate material.  At this point, the laser light is bouncing around the cavity and even less light makes its way back to the camera. 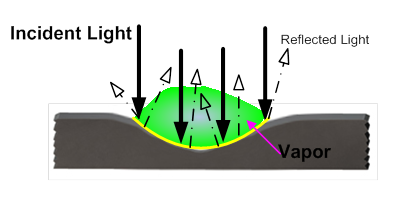 Stage #3: Vaporization and Formation of Cavity

The final stage is once a Keyhole is formed.  This is a deep, narrow cavity in which the metal is melted, some of it vaporized and then it flows around the cavity and solidifies.  At this point, the laser light hits the keyhole, bouncing all around the keyhole and most of it gets absorbed into the substrate, with only a little of the light making its way back to the laser beam optics and camera. 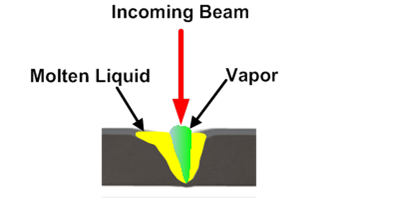 The process of moving through the above four stages could take a few hundred milliseconds.  During this process, there is a huge variation of light that bounces back to the camera.  For example, the light bouncing back during the Keyhole Formation stage could be 10-15% of the light received during the initial irradiation of light right after the laser is powered on.  As a result, a weld camera that has been specifically designed for the huge range of light variation such as the Xiris XVC-1000 is necessary to properly image the laser welds through the start up of the laser beam.

Cameras have been integrated into laser welding and cutting machines for some time as a valuable tool for set up and alignment of the laser head to the workpiece.  However, traditionally, once the laser power was turned on, the cameras were not able to see the laser light.  To do this, a high dynamic range weld camera such as the Xiris XVC-1000 is required to see the enormous range of light reflected back from the substrate and deal with the huge range of brightness of laser light reflected back to the camera.

Sign up to receive our Weld Video of the Month