A multinational Tier 1 automotive parts manufacturer had a problem.  They make single wall liquid fuel tubing with an extruded corrosion protection coating.  The completed tubing is used in various automotive applications where a compression fitting is made over the tube, requiring a perfectly smooth surface finish to avoid any leak path that would break a sealed connection.  Sometimes the build up of particulate on the extruder would cause scratches or grooves on the tube surface as it passes through the extruder, defects that were just not tolerated by their automotive OEM customers.

The single walled tubing is formed and welded in a different plant and transported to the coatings plant in a large coil format.  The coiled tubing is fed into a coating extruder that applies a thin plastic coating on to the tube.  The manufacturer had to monitor the coated tube for the presence of any scratches that may occur that are more than 0.015 mm in width or depth.  If there is a scratch on the extrusion surface and there is a pressure fit component applied to the tube, then a leak path could result. Because the scratches could happen anywhere around the tube, 360-degree inspection of the surface was required. 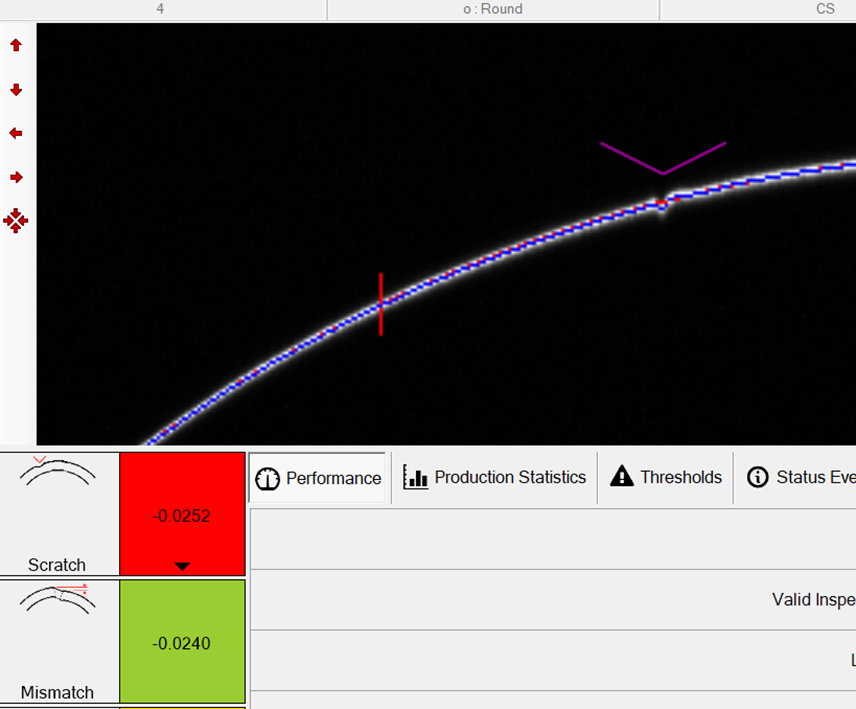 Traditional area scan cameras have been used to inspect the extrusion surface with mediocre results as they rely on the difference in contrast of the coating surface.  Often, there is not enough contrast on darker materials to detect scratches with reliable accuracy.  To combat this problem, the customer decided to use a Xiris laser triangulation inspection system to get a high-resolution profile of the tube coating surface.  Four sensor heads were placed all around the tube to inspect the complete tube surface.  Special scratch detection algorithms were developed by Xiris to detect localized scratches that could appear in any orientation on the tube.  When a scratch was detected, the production line was triggered so that it can automatically cut out the defective section of the tube and eject it.  The position and type of defect was then recorded and monitored from a remote supervisory information panel for all production staff.

The inspection units were installed and commissioned very quickly.  To properly validate the equipment, production tests were made by manually creating various kinds of scratch defects and determining if they could be found.  All of the defects created were robustly found by the systems during the qualification phase so they went into production.  After running the systems for some time, the customer was so happy being able to reliably detect scratches on their product, they decided to order inspection systems for a second line.