Picture in a Picture from a Weld Camera!

Written by Emily Blackborow on March 5, 2019

Xiris has recently added a powerful new feature to its WeldStudio™ software utility that controls and displays images from its weld cameras: the Picture in a Picture (“PIP”) feature. The PIP Feature allows for two-tone mapping algorithms to be used on different portions of the screen at the same time, one on the full screen and one on an adjustable inset window.  Each tone mapping algorithm will have its own settings to enhance key areas of interest in an associated view.

The dual tone mapping is performed right in the camera view by using the camera’s onboard image processing capability and the image is streamed to an external device as one image.

Screenshot of WeldStudio™ with Picture-in-Picture Mode 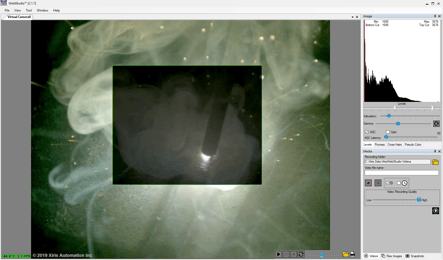 The image processing tools inside WeldStudio™ allow the operator to manipulate and measure different  features of the weld, to help make meaningful process decisions. The playback mode allows users to view and manage recorded video offline for further analysis, including the ability to slow and freeze frames, view frame by frame, or manage video transfer to an external device.

The PIP feature ensures that enhanced images can be created with better, localized contrast that improves the visibility of key regions of brighter or darker brightness in the image.  Being able to tone map two regions of interest separately allows the user to see higher contrast image details in a foreground and the background. For example, in welding applications where there is an extreme brightness range between the weld area and its background (such as in electron beam welding or high powered laser welding), a smaller inset foreground window can be placed over the welding arc or spot and be optimized for very bright light localized to that region, while the surrounding darker background can be brightened to see the weld seam, allowing heat affected zones and other darker features to be seen more clearly.

By performing the PIP feature inside the camera, fewer external PC processing resources are needed to process the resulting images. In addition, less data needs to be transmitted between the camera and a PC (lowering network traffic that can be beneficial when using multiple cameras), allowing full frame rate to be maintained with the camera at 55 fps.

Our users will have full control of the brightness settings, window size and location for the foreground inset window independently of the the settings for the background image. This feature has been implemented to work on both color and monochrome versions of the Xiris weld cameras.